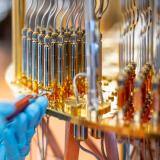 Operations on quantum computers, like on any technology, are inevitably subjected to errors, due to both external sources of interference and imperfections in their operation. But coping with quantum errors is particularly challenging. Writing in Nature, Sebastian Krinner and Nathan Lacroix, scientists at the Quantum Device Lab, together with their collaborators and working with colleagues in Canada and Germany, report a substantial advance towards fault-tolerant quantum computers. Using 17 physical qubits in a superconducting circuit, they demonstrate quantum error correction using the so-called surface code, which is known for its exceptionally high tolerance to errors. 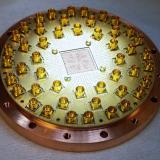 ETH Zurich and the Paul Scherrer Institute (PSI) establish a joint centre for the development of quantum computers. ETH Zurich provides 32 million francs for this centre, which will host around 30 researchers. Under the leadership of Andreas Wallraff and Jonathan Home they will pursue research in the two technology areas of superconducting circuits and ion traps. In the future, further groups working on related topics will complement the research centre. The Quantum Computing Hub will be located on the PSI campus in Villigen, Canton of Aargau. For this purpose, an existing building was converted specifically for research on quantum computers. 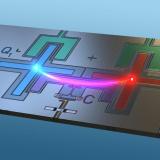 Quantum computers, which have the capability to outperform classical computers on specific computational tasks, heavily rely on high-performance two-qubit gates for the realization of quantum algorithms.  In superconducting circuits, two-qubit gates are typically based on a transversal qubit-qubit coupling, implemented either by rf-control or the in-situ frequency tunability of computational qubits.

In this work, we demonstrate a novel approach using a tunable cross-Kerr-type ZZ interaction between two qubits which we realize with a flux-tunable coupler element.
This approach ensures direct control of the acquired conditional phase, without relying on excitation transfer or sideband transitions, and thus features an inherent resilience to leakage and cross talk, both major concerns in the light of recent progress towards full-scale quantum error correction. Additionally it innately enables the realization of continuous gate sets, highly beneficial for near-term variational quantum algorithms. A simple control paradigm and robust performance ensure easy scalability and high compatibility with existing platforms. 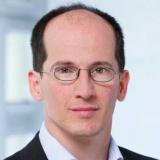 Andreas Wallraff receives one of the 2020 Helmholtz International Fellow Awards of the Helmholtz Association of German Research Centres. The award serves also to expand an existing cooperation with scientists at the Forschungszentrum Jülich (Germany). 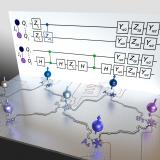 Tue, 10/20/2020 | A hardware-efficient gate set for superconducting qubits is shown to improve the performance of deep quantum optimization algorithms.

Quantum computers have the potential to solve problems that today’s computers cannot solve in a reasonable amount of time. However, their computations are not yet reliable, meaning that algorithms with many operations cannot be executed without significant errors. This article presents a method to reduce these errors by reducing the total number of operations required to execute a quantum optimization algorithm. This work thereby offers an approach to solving more complex problems on existing and near-term quantum computers.

The optimization algorithm considered in this work uses an Ising-type interaction between pairs of qubits. In prior work, this interaction was typically realized with a long sequence of standard quantum gates. By developing a gate that directly realizes the desired interaction, this work presents a hardware-efficient implementation that reduces the total number of gates executed on the quantum computer. This reduction in the number of gates results in a lower number of errors and, therefore, improves the overall performance of the algorithm.