The circuit QED architecture [1] is extremely attractive for quantum computation using superconducting electronic circuits. It provides an ideal setting to control the coupling of qubits to their environment while at the same time allowing for the strong and controlled coupling to photons, to both control and read-out the qubit state. The off-resonant strong coupling between the qubit and the resonator can be used to perform a quantum non-demolition (QND) dispersive read-out of the qubit state. The isolation of the qubit from its environment enables the measurement of some of the longest coherence times in superconducting qubits. In our lab we explore sources of decoherence with the aim of eliminating them to a level that error correction becomes feasible. With state-of-the-art microwave techniques and large bandwidth data acquisition systems which we develop, we control the dynamics of the qubit state and perform full tomographic readout. An example is our demonstration of quantum geometric phases in superconducting qubits [2]. Coupling multiple qubits using the resonator as a coupling bus we have explored teleportation and Toffoli gates in a solid state architecture [3, 4]. Most recently, a full deterministic teleportation protocol has been realized [5]. The circuit QED architecture is a prominent candidate for addressing quantum computation problems on the multi qubit level using techniques which are also highly relevant to other approaches for solid state quantum computation. 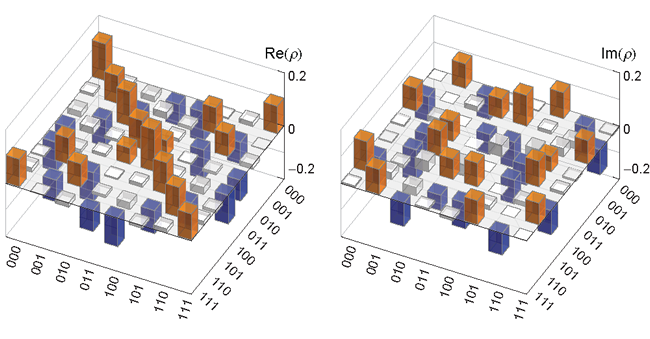