Correlations, indistinguishability and entanglement in Hong-Ou-Mandel experiments at microwave frequencies

We present the very first measurement of the Hong-Ou-Mandel effect outside the domain of optical frequency photons. This genuinely quantum effect allows us to demonstrate the fundamental indistinguishability of single particles of light (photons) at microwave frequencies by measuring their coalescence into a photon pair at a beam splitter. Our experiments open new possibilities for using this effect in quantum communication and information, e.g. for creating remote entanglement. The performed experimental analysis is one of the most complete and instructive studies of the Hong-Ou-Mandel effect ever performed inany physical system.

In our experiments two individually triggered singlephoton sources emit every tr = 512 ns two photons to the inputs of an on-chip beam splitter. For indistinguishable photons, which share the same frequency, temporal profile and arrival time, the two photons leave the beam splitter as a pair in either one of its two outputs. The generated state is the two-mode entangled two-photon NOON state (|20⟩+|02⟩)/√2.

This is shown in the measurement of the second-order cross-correlation function displaying anti-bunching which proves that no photons are detected in both output arms of the beam splitter simultaneously (Τ ≈ 0), see Figure 1(a). The bunching of the two photons is directly observed in the secondorder auto-correlation function measurement, Figure 1(b). In both measurements at the times Τ around ntr for all integer numbers n ≠ 0 we observe the correlations between subsequent photon pairs that leave the beam splitter at random outputs. Finally, the measurement of the density matrix (Figure 2) demonstrates the entanglement of the two-mode state. 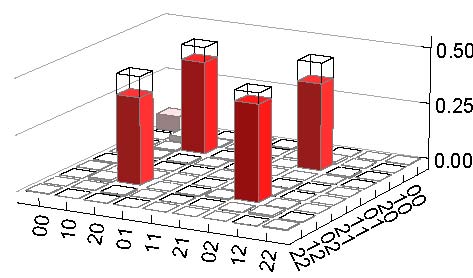